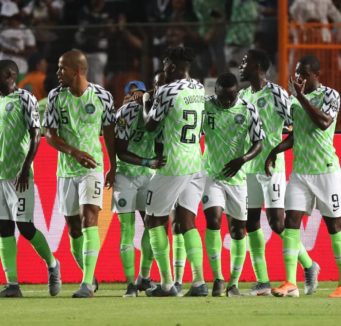 A last gasp winner by defender, William Troost-Ekong earned the Super Eagles a 2-1 win over South Africa in the quarter final of the ongoing Africa Cup of Nations in Egypt.

The victory also means the Gernot Rohr-tutored side progress to the semifinal stage.

It was the Eagles’ first win against South Africa since a 2-0 friendly win in 2013.

Samuel Chukwueze gave the Eagles the lead in the 27th minute as he bundled in the ball after his initial effort came off a South African defender.

The Eagles almost doubled their lead in the 49th minute only for Oghenekaro Etebo’s well taken free-kick to crash against the wood work.

In the 56th minute, the Eagles went close again but Odion Ighalo failed to connect with Chukwueze’s pass across the South African goal.

South Africa equalised in the 71st minute through Bongani Zungu whose header, off a free-kick from Percy Tau, looped over a stranded Daniel Akpeyi.

The goal was initially ruled out for offside, a check on the Video Assistance Referee (VAR), saw that Zungu was offside but the ball last came off Ighalo.

With the game heading for extra time, the Eagles won a corner and Moses Simon’s swung in effort was tapped in by an on rushing Troost-Ekong, which proved to be the winner.

The Eagles have now beaten South Africa in all their three encounters at the AFCON, 2-0 at the 2000 edition co-hosted by Ghana and Nigeria and 4-0 at the 2004 tournament held in Tunisia.

They will now meet the winner between Cote d’Ivoire and Algeria in the semi-final on Sunday.